In recent years, the small town of Shuhe, five kilometers north of Lijiangs old town of Dayan, has become a popular alternative for travelers who want a little less Lijiang with their Lijiang. Despite also being part of the same UNESCO World Heritage Site as Dayan, it is a smaller, quieter town that has retained less of its old architecture but has much better access to nature, including Jubao Mountain (聚宝山), which is perched on the town's western side, and the majestic Jade Dragon Snow Mountain (玉龙雪山), just a few kilometers to the north. 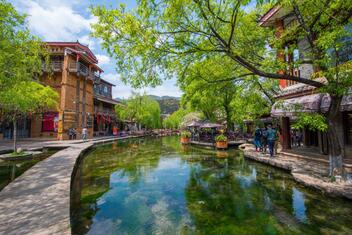 In the early 1990s the Chinese government nominated …

A small town on the western shore of …

Daju is composed of a large central town …

A lovely natural scenic area just outside of …

It takes 8 minutes by walk from hotel …

I Am Here Inn

Boutique hotel in a older, but lovingly restored …

Family-run guesthouse in the heart of Shuhe Old …

This guesthouse is close to Shuhe Old Town …

Jinmao Hotel Lijiang, in the Unbound Collection by Hyatt

The hotel is next to J.LIFE shopping …

Shuhe is without a doubt very impressive. A little river flows beautifully through the old center and it is nice to sit outside the restaurants near the river. From our hotel we walked to Baisha. It is really authentic and very quiet. We had a coffee on a balcony of a cafe on the first floor with a beautiful view on the mountains of the Jaden Drake.
I stayed in Shuhe and absolutely loved it. There are some beautiful traditional courtyard guesthouses, great restaurants, little winding alleyways with shops selling handicrafts. It's less crowded than the 'original' Lijiang old town, and a lot closer to Baisha so you can easily get there by bicycle (only 5km from Shuhe to Baisha). It is touristy of course but overall a very laid back and beautiful place.