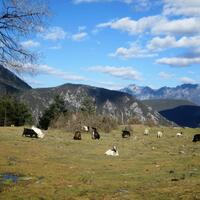 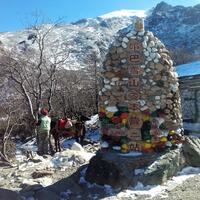 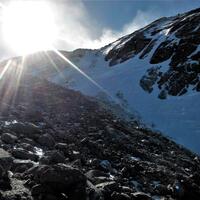 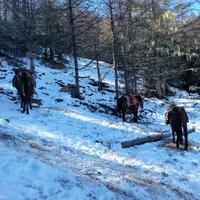 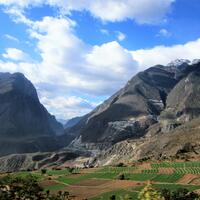 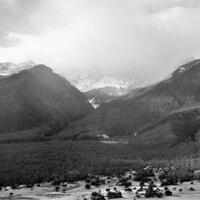 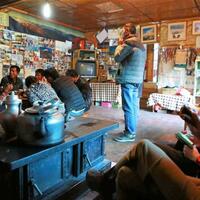 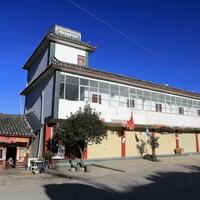 Getting to know Haba Snow Mountain

Haba Snow Mountain (哈巴雪山) is located in southeast Shangri-la County (香格里拉县) in Yunnan. It rises to 5,396 meters above sea level, making it one of the tallest peaks in the province. It is covered with snow year-round, but is relatively easy to ascend, making Haba a popular destination for both amateur and professional climbers.

This is an amazing trek not only for hiking enthusiasts, but also for those who just simply love nature and mountains. You have to be in a good physical shape though. If you are used to easy relaxing walks, this certainly won't be it. As Haba Snow Mountain is not technically difficult to climb, it is considered a perfect mountain for beginners who plan to someday climb the world's more challenging peaks.

I climbed it without any mountaineering experience, and for the first time in my life used crampons and an ice axe. If you also plan to climb Haba Snow Mountain with little or no previous experience, it is doable, but be sure to hire a local guide, just as I did. It will save you time and make the trip far safer.

During our trip, we first visited Tiger Leaping Gorge (虎跳峡) for a two-day hike. Then, instead of going back to the city of Lijiang (丽江), we got on a minivan at the Middle Tiger Leaping Gorge, and headed towards Haba Village (哈巴村). It was quite an unprepared trip. We didn't even know where we would stay, or if climbing was possible in December.

There are a couple of guesthouses in Haba Village. Our driver dropped us at Haba Snow Mountain International Youth Hostel (哈巴雪山客栈). Without an advanced booking, we still managed to get a room. Because it was a late afternoon already, we decided to stay there as it seemed like the hostel was empty and there were plenty of free rooms, most likely due to it being low season. Being the middle of winter it was quite cold, but the hotel had electric blankets. We stayed in our beds all evening. The lady who owns the hostel was very friendly and helpful and cooked a delicious meal for her guests.

The base camp hut is a good shelter from the omnipresent wind and cold. There were even blankets inside. However, a sleeping bag is pretty much required. If you don't have your own climbing equipment, you can rent it in Haba Village. I didn't have crampons, an ice axe, or proper snow outerwear.

But we asked the hostel owner and she prepared everything necessary. You have to have proper waterproof shoes and clothes, warm gloves, a thick hat, a couple pairs of socks, sunscreen and lip balm. Also, take a mobile power bank and hiking stick. A headlamp is a necessity as well, as the climb to the mountaintop from base camp starts very early in the morning. I had a simple hand lamp, but it was very inconvenient to hold it in my hands while climbing up the mountain. My advice is to bring a quality headlamp and extra batteries, or rent them.

If you are not an experienced climber, you should certainly hire a mountain guide. He will bring you safely up and down the mountain and you should definitely listen to him if he says that the weather is not suitable enough to climb. We rented two horses, and the woman from the hostel was very insistent that our bags be carried by the horses. She was very worried that the walk would be too tiring otherwise. And while it was not the easiest hike, it was not actually that bad either. In the end, we could have carried our baggage ourselves, but still the horses were a help. So hiring ponies is not a must — and only totally necessary if you are worried about conserving energy for the push to the summit.

Setting out for base camp

We talked to the owner of our hostel about ascending the mountain, and she recommended starting our trip early the next morning. We had dinner and went to bed early. Next morning she woke us up, calling for us to come and eat. She had arranged our climbing guide, who was ready with horses and all the necessary equipment. We started our hike up the mountain soon after breakfast and it took about five or six hours from Haba Village to reach base camp 4,100 meters above sea level.

On the way, we stopped a couple of times to take photos and let our guide smoke a cigarette. In the middle of the hike, there was a wooden hut where we met a group of Chinese hikers. We rested there while having lunch and at the same time warmed ourselves next to a fire. Our horses had to rest as well. We spent about an hour there and reached base camp later in the afternoon. Even though we could have gone around and explored our surroundings, we decided instead to rest up to prepare for the climb the next day.

We woke up very early — it was before 3am — and had a breakfast prepared by our guide. My guide and I were the first to leave. The Chinese group that we met the previous day started its ascent about one hour later. Luckily for me, we started early, because later on the wind got so strong that the group following us had to go back to base camp without reaching the mountaintop. They must have been quite disappointed.

At the beginning of the climb it was completely dark outside, and the headlamp was a necessity. The climbing stick made the entire journey far easier as well, especially when the climb gets very steep and the wind begins to blow. The higher you get, the more often you want to stop and have a rest, but the goal pushes you on.

We reached the top before 9am, and probably stood there for ten or 15 minutes. We couldn't stay any longer due to extremely strong winds and bitter cold. I took some photos with my phone, and then it switched off. Phone batteries drain incredibly fast at that elevation...or maybe my phone just froze.

Luckily, I had an actual camera too. But the wind became so strong that it was quite exhausting just standing up there. We couldn't stay much longer as our trip was only half finished. Getting down was probably even a bit harder than climbing up because of that wind. We had to stop very often and stand there with ice axes ready simply to not to be blown away. Finally, after a couple of hours struggling with the wind, we were back to base camp. It took around eight hours to climb up to the top and then return. The same afternoon, we left the main slopes of Haba Snow Mountain and hiked back to Haba Village. 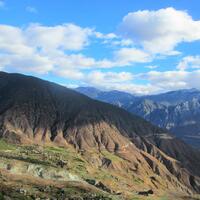 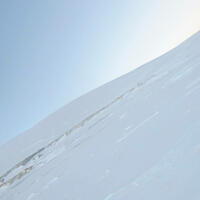 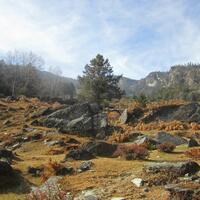 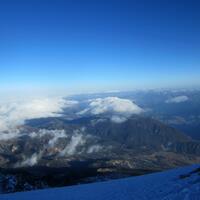 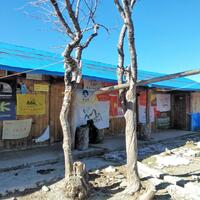 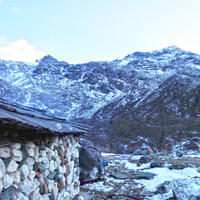 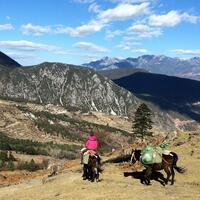 We stayed one more night at the hostel in Haba Village, and the next morning planned to take a bus to Lijiang. Note that the village does not have a bus stop or specific bus schedule. Hostel owners have a pretty good idea of when the next buses are heading through town though, and in the morning ours woke us up in time for a quick breakfast before the bus to Lijiang arrived.

We hadn't really made any specific plans for this type of trip when we arrived in Yunnan. It was all quite spontaneous but turned out to be perfect. The local people we met were very friendly and will seemingly help with anything. But please keep in mind, you must be prepared to have your plans canceled by weather conditions.

I was extremely lucky because it was a sunny series of days with no clouds, and because we started early enough to make it to the top with the help of a seasoned guide. As mentioned before, the other hikers had to turn back because of strong winds. We also met two foreigners who were making a try of the ascent for the second time, also having been turned back by sudden inclement weather.

Pack properly, get acclimated to the elevation before you set out and remember that overnight temperatures can drop to -30 degrees centigrade without much notice during the winter months. The best time to climb Haba Snow Mountain is mid-March through June or mid-September until December. At other times the weather is too rainy, windy or snowy to make the attempt.

Overall, I spent approximately 1,500 yuan for this trip. That includes bus tickets from Middle Tiger Leaping Gorge to Haba Village and then back to Lijiang, hiring a guide, renting equipment and two horses, our hostel stay, sleeping at the base camp hut and food. If you start your trip from Lijiang Bus Station (丽江客运站), a ticket to Haba Village costs around 40 yuan. When taking that route, you also have to pay a 65 yuan entrance fee for Tiger Leaping Gorge, whether you stop there or not. You should definitely stop though — the experience is well worth it.

Additional costs include a 200 yuan conservation fee to enter the Haba Snow Mountain area. Our guesthouse ran about 50 yuan per day per person, but that may rise to about 150 yuan during peak months. The guide also charged 100 yuan per day plus 150 for each horse. Gear rentals cost around 200 yuan. Overall, it is a small price to pay a great experience and an unforgettable adventure.

Editor's note: A version of this article by author Helena Vikmane was originally published on her website In Love With My Planet. All images belong to Vikmane unless otherwise noted in the caption. We thank her for allowing us to republish it here on GoKunming.

Snapshot: In search of Shangri-la

Getting Away: Tiger Leaping Gorge

Getting away: Haba Snow Mountain

Cycling across heaven: From Deqin to Lijiang by mountain bike

Guo Duomi December 8, 2008 1
Please login or sign up to comment
0
I have to agree with @alien. New or borrowed boots can lead to misery and pain. Take care of your feet.
1
Especially 7 days into a 2-week trek.
0
That's by, no pun intended - you can't buy new feet.
0
I would never walk anywhere far in the mountains in anybody's boots but my own, well broken in buy my own feet.
0
Thanks and can you rent boots in Haba Village or do you have to bring your own?
0
Yes. Spend time at higher altitude also.
0
Would anyone have some workout advice before hiking? I live in Kunming, if you jogged enough here would it be enough to get you somewhat prepared?
0
Haba is definately on the list. need to work out more for that lol...
0
Yang Xiu Lan's place is indeed the place to stay in Haba. Very helpfull and good cooking.
0
Yang Xiu Lan (杨秀兰) Second character now correct.